For those of you in TV Land just tuning in, I'm the girl formerly known as The Gothic Supermodel. I spent years traveling and modeling, and then started my own Modeling Referral service for punk, pierced, goth, glam and tattooed talent that I ran for 10 years, Wicked Talent.

I guess you can call me a born again person. While I believe in no god, I do believe in the power of self change. I have ditched my penchant for saying things for the sake of upsetting others, my black hair and goth clothes, and my tolerance for cruelty in all forms.

I will be from this point on using this journal to post about what goes on with my Steampunk Clothing Company, Clockwork Couture, posting a good deed  a day, and occasionally my lunch menu in the hopes to inspire you to make small changes that make big differences.

ghoulgurl at Help me find a home for these cats...
Please please please...

There are these two AMAZING, fat tabby cats that live in my complex. They always great me at my car, and follow me to my house and I freaking adore them.

I ran into their owner today, an elderly woman. She told me she had been in and out of the hospital over the past 7 months do to a stroke and the doctor said she had to get rid of her cats, since she just couldn't take care of them anymore. She's had them for 10 years and was really upset about the whole thing. Said she stayed up all last night just talking to the cats. :(

Her daughter came out and talked to me a bit as well, saying that she can't take it anymore and if they don't find a home fast, they're just going to the pound. I said absolutely not and traded info with them. I know if they go to a pound they're doomed. They're 10 years old, and there are sooooo many kittens out there right now.

If I didn't have a cat, I'd take them in a heartbeat (their past interactions with my Bug weren't super successful... hehehe). Hell, I might still end up shoving them in a garage if it comes down to it until I find somewhere for them to go (Adrian will fucking kill me... hehehe).

I'll try to get pics of them. Please spread the word. Thanks.

So, an employee of my daughter's school told me about her Yorkie pup her kids no longer wanted. She went on and on about how no one has even touched the dog in months and especially never played with him. They leave him outside ALL the time, even when it rains and she realized that the best thing she could do for him was give him to someone else. Enter me, the sucker.

He just got his shots, neutered, and a haircut. He desperately needs a home with someone who will love him. He's completely non-aggressive, loves other dogs, alittle chase-y with cats but I can tell that would stop when he realizes they can smack him, loves kids, has great energy and really playful. He's not yet 3 years old.

kylecassidy at post
I'd posted a few days back about the fire at the Widmere apartment building and the pet rescue that was going on. Things have taken an ill turn. While a number of missing pets have been spotted inside the building, in the windows of their own apartments, and in the building by security guards, the city is refusing to let rescue workers into the building and is scheduled to demolish it, with these pets still trapped inside.

I know the thought of someone taking a wrecking ball to my place with Roswell and the others still inside would be worse than losing any of my material possessions.

Despite obvious signs of life inside, no one took action--not the owners, not L&I, not the fire marshal, not the insurance investigators who all had access to the building. Just two days after this disaster, fire fighters said there was nothing more they could do and no possibility that cats could have survived.

Now the Windermere owners claim that the buildings' exterior doors are sealed and that L&I won't allow anyone inside ever again--and yet a maintenance man, security guards, and insurance company investigators have accessed the building as recently as today, Wednesday February 9th. Meanwhile, the owners are moving forward with demolition, knowing full well that there are still pets inside!

If you think this is wrong, if you care about the cats inside and the people who want so desperately to get them back, if you want to let the City of Philadelphia know that it should never happen again...

Saturday, February 12 @ 2pm
4800 Walnut Street - in front of West Philly High School, across from the Windermere
Bring friends and signs

woot! That's right, Gail Carriger is coming down for tea and I'm pouring. Come hang with us and listen to her read from her books, answer questions and discuss the numerous health benefits of parasol use.

Did you wake up this morning and think "I wonder what in the tarnation Donna Ricci has been up to lately"* then my oh my have I got your answer!

Well, for starters, I still have that super cute rabbit I rescued 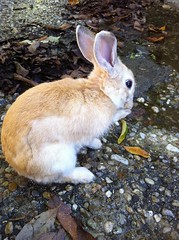 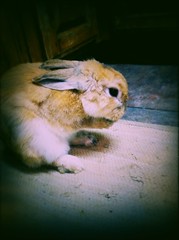 Yup, he does that alot. The whole "sitting on my bunneh tocks and washing my face" thing that I find totally irresistable. I just want to flip him on his back and put my face directly in the middle of downy rabbit tummy. This of course may get half my face scratched off, but it'd be bliss for a second before. And while I'm not actively looking for a home for him, if someone out there would be a great bunny parent to this little guy, he's up for adoption. He has been neutered. I don't know anything about him except that he is under 2 years old and not going to get any larger.

By the way, SO glad I picked this little guy up because the very next week, it turned into coyote mating season and then they come down off the mountain. Spotted this guy looking for tasty young rarebit right where I got the bun bun. 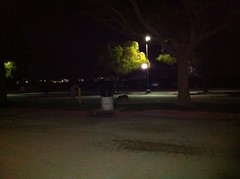 I went to a hockey game and the Smoking Man was sitting in front of me. 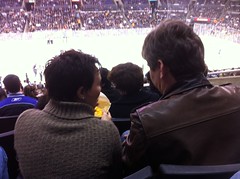 I think he was "fixing it" so the Russians couldn't go to the Olympics or something. Ironically we have been rewatching X-files from start and we're on season 5 now.

I have a teenager now. 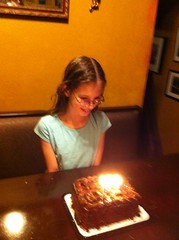 She wanted to go horseback riding for her birthday so we went on a trail ride. She had a great time and I. Well, a friend has nicknamed me Nadia Comanechi for the way I had to vault off of my adopted horse Gus. Apparently, he is not a trail horse. Cest la vie!

We also went to Medieval Times for her birthday. 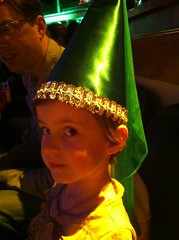 The knight kissed a flower and threw it to the teen who MAY or may not have swooned just a tiny bit at the happening. Cute.

My complimentary copy of the French translation of SOULLESS by Gail Carriger arrived today along with bookmarks. 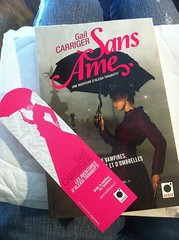 *If you really woke up and wondered that, I hope it is only because we are REALLY close friends who haven't spoken lately, or you have a head injury.

This pup was brought to the vet to be euthanized , simply because his front leg is broken. Our vet declined, as he's a sweet young dog. They are temporarily caring for him and will fix his leg if he has a home to go to. Please contact Gateway Animal hospital in Glendale if interested @ 818 244 2934. We'd love to save this pup's life. Please share with friends and cross post. Thank you.

edited to add: Just spoke to Gateway and they say no cats. He won't be available for 2 weeks and they are accepting donations to offset the cost of the surgery as well as toys, blankets and other means to make him more comfortable. You will be put on a list if you want to contact them and he will be re-evaluated after surgery as it makes some dogs aggressive or sometimes super shy after being in that amount of pain.

I was at the Equestrian Center and someone slid up beside me to say "They want to see you in the office."

Now, when you are as rebellious, outspoken, and generally against the grain as I am, my first reaction was "What did I do now?"

Apparently, I was not in trouble but something else was. This young little lady bun was dumped at the Equestrian Center because ya know, there are wild bunnies there so of COURSE a domestic bunny would be just fine out of the blue when it's starting to drop down in the low 30's at night! Damnit people are just insensitive and dumb sometimes.

Would anyone like a little rabbit? She's litterbox trained for her urine (I was shocked too!) and really friendly. Her fur is matted at her hindquarters and ribs but I've got those almost all worked out. She's on the thin side but that too is resolving itself with a good diet of dark leafy greens and pellets.

It doesn't seem to stop her cannibalistic tendancies: Bunneh is creeping me out "Watership Down" style She wants to play with Twitchy, who thinks she is one ugly squirrel

But you want to know, what GOOD are bunnehs? I mean, cats eat mice, dogs sound alarms, but what do rabbits do?

Let me help.
Rabbits are great when your TV isn't getting good reception and the recession has you cutting your cable bill. Simply put rabbit on top of television and adjust the antennae as needed. Rabbits will take care of those pesky left over greens. Also, you can give them dandelions and help keep your lawn greener!

So, they help with enterttainment, finances, lawncare AND help you lessen your waste. Bunnies are green! And let us not forget what terrible taste in couches you have. Bunnies are cute and distracting and no one will notice that mustard yellow fuzzy thing you got from your mom's basement. They will be looking at the cute.